Story:
Chiharu is a wizard who works himself near to death, unable to trust those around him to help and believing he isn’t worth anything without his abilities in magic. When he runs into a traveler named Toyohi at a local bar, he begins to finally smile and even fall in love. If only his insecurity would allow him to trust…

Violence:
Pretty low stuff. We hear about things going wrong off screen, requiring wizards to interfere and save others, but we never see any actual violence occur.

Language:
A bit of negative self-talk and maybe a d-amn, but tame overall.

Nudity:
There is an almost implication of two characters sleeping together, but it turns into nothing and we don’t really see much besides a bit of bare chest. No details.

Theology/mythology:
If the idea of a world where magic exists bugs you, this isn’t a show for you. But if you’re chill with that, there’s really nothing deeper going on in this section.

Personal impression:
This is a wonderful, although sadly short, series. The animation style is very odd, moving more like a visual novel with swirling backgrounds. The story, tone and colors are nice enough to make up for it and it was refreshing to see one more healthy and somewhat natural relationship on screen.
The only downside? This is more of a mini-series, likely meant to promo a manga run. It’s a shame more of this won’t be seen on screen, or in a more fully animated format. Even so, it’s a great little story, sweet, to the point and lovely to look at. 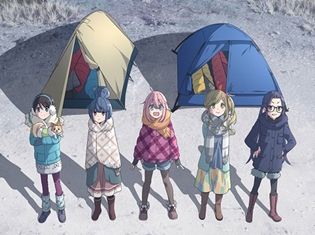 Story:
Nadeshiko had one goal after moving. To see the famous Mount Fuji! On her way to a good sight seeing campsite, she falls asleep and has to seek help from a fellow high schooler who likes to solo camp. The two form an unlikely relationship and Nadeshiko learns to love camping.

Language:
Besides a d-mn or two, this show is pretty clean.

Nudity:
There are a few bath scenes and we see a bit of cleavage, but that’s honestly it.

Theology/mythology:
We see some shrines and even a story about one being dedicated to a dog. But it’s done in an almost touristy way. Actual religious discussion doesn’t occur.

Personal impression:
This show was surprisingly good! We don’t really enter the creepy fanservice area and the dialog and gags are actually decently… natural? It’s definitely nothing ground breaking as far as slice of life shows go. The tone and mood are pretty typical really. But the subject matter and characters fit that tone well and there’s no drama either. Plus they really do make camping look fun, which is a feat as I’ve never had good experiences with it myself.
If you need a light hearted and calm show with a few spot on gags, this is a great title to check out. Just don’t come snooping around for any plot. Or more character growth than someone gradually learning how to camp.

Story:
A bunch of guys and one girl are entering a huge musical competition for little actual reward beyond saying “we won this huge thing.” Supposedly love ensues as well, but not really and, well, it’s pretty obvious this was a cash grab by this franchise to make more off the well known game La Corda D’Oro. REALLY obvious.

Violence:
There is an episode that shows some typical anime bullying and such, but we don’t see much actual violence, just implied through dialog and tone.

Language:
Nothing much here besides some sh-ts. Tame overall.

Nudity:
Another clear area. Some characters make a few very vague innuendos, but it’s tame enough that you can miss it pretty easily.

Theology/mythology:
You know how the original anime adaption had the whole fairy and magical violin thing? Well, toss that right out the window because we only see that fairy at the very end (we’re talking the last two minutes of the entire series) and it plays no role whatsoever in the plot. So if you’re super sensitive, maybe skip this, but for everyone else this really shouldn’t be an issue.

Personal impression:
This is another show I’d play while reviewing my kanji compounds and doing chores. Again this shows you exactly how riveting, or lack thereof, this was to watch.
Even if shoujo trash is your thing, this show is incredibly boring. The “romance” is a joke as it really doesn’t occur at all. And normally I’d actually be chill with that except there’s not much else going on either. The lead is already super talented, though she lacks a bit of confidence. In fact, the only growth she had was her looking someone in the eye and saying “no.” Eeeexcept she wasn’t super crippled by her ever so slightly lower confidence to begin with. So the change is so small, if you blink, you miss it.
And the male characters are even worse. Otome games are known for their bland stereotype male leads, but this show was so flat it hurt. The only interesting dynamic was perhaps between two male violinists and how one looked up to the other to the point of doubting his own skill set, but the show somehow managed to water even that down.
Then there’s the “drama.” Which is a joke. Truly. The first anime of this franchise showed some cheesy visuals of what people would imagine while music was being played and, yeah, it was cliched, but this spin off left “cheesy” lightyears behind. The musical finals near the end show visions of a solar eclipse. A giant solar eclipse. I couldn’t make this up if I tried. There was a solar eclipse as the lead “villain,” complete with cape, bemoaned how he had to survive for years with a “humiliation worse than death.” Spoiler alert: the heroine pitied him once.
…People got paid for this….
Anyway, I suppose if you, like me, enjoy having some background noise on while doing chores or homework, this is a clean show and pretty toothless (thus the All Ages rating). But otherwise… pass on this (even the pretty boys aren’t that pretty. Just sayin’)

Story:
Kataro is trying to become a serious novelist when he falls in love with a girl on the track team in his last year of middle school. Their romance is a story of many firsts…

Violence:
None besides some characters falling while running and thus needing bandages and such. Nothing graphic.

Language:
Also pretty non-existent. Some very rare cases of sh-ts or d-mns, but they are quite uncommon.

Nudity:
Besides some bath scenes where no details are shown, nothing here either.

Theology/mythology:
Our male lead plays a role of a traditional mythical creature from Japanese folklore. It is never explained on screen, however, and thus you would only know the story being acted out on screen if you knew said folklore. There are also a few scenes of praying at the shrines. Again, no talks about religion itself, as per usual.

Personal impression:
This is probably the most realistic teen romance I’ve ever seen. It’s also probably the most boring. And, yes, those two things are pretty much inseparable. Realistic romance isn’t exciting unless, ya know, you are the one IN the romance. Holding hands with someone you have a huge crush on is exhilarating for YOU, but to anyone else it’s pretty boring. That’s this show in a nutshell.
Our male lead is very idealistic and romantic, our female lead is dreamy and anxiety bound and every bit of drama that comes up reflects those elements. Even the parents and siblings of the leads follow logical arcs fitting their characters such as the mother pushing for her son to take up “normal” work goals and an older sister telling her sibling that long distance “never works.” I never felt like a scene was unrealistic. Everything made perfect sense. Even the clear fact that LINE (a texting app) was likely a huge financial backer for this anime made sense. Probably the most gentle and believable product placement in anime ever.
The downside was, of course, that everything was incredibly boring. Sweet, but boring. Even the art and music was like that. Nice, but largely unmemorable (aside from the creepy CGI background characters…).
If you’ve been craving a break from over-the-top romance drama, this is what you want. It’s sweet, sometimes very much so, but it never crosses into the unbelievable. It’s a very grounded show. Just don’t complain to me that you started to fall asleep a few times…

Story:
Konagai Tomoko is a shy girl who owns three cats. She meets a popular girl who owns a cat. They become friends. The “cats” are chibi cat girls. That’s it. That’s all there is. How in the world was this funded again?

Nudity:
None. The “cats” are tiny cat girls, but we’re spared anything gross or sexualizing. Although what with the whole loli thing, it’s hard to tell sometimes…

Theology/mythology:
Aside from cat girls (a thing which is never explained), nothing here.

Personal impression:
This whole series is around a half hour long grand total. It has no plot. There is no point. The characters aren’t horrid, but they aren’t good either. I can see this mini series as existing for two reasons. 1) Filler between other shows airing on TV or 2) promos to get a full series deal. Regardless, it seems like a real waste of money. No matter how short a show is, it still takes money to make it and I just don’t understand how this little thing could make up its own production costs. Especially when, due to having no actual story, it’s so forgettable.
Of course, if you need something cute and kid friendly and non-offensive (generally), this show is just fine. It’s rare for me to be able to mark a show as All Ages, so woowho for that. But besides those reasons…. this show has nothing unique to offer. Unless you love watching cute cat girls. Like a lot. 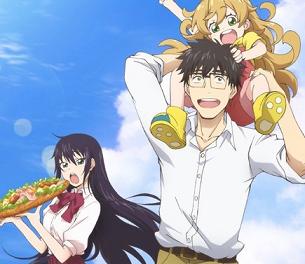 Story:
Kohei is a single father and school teacher who can’t cook to save his life. Feeling like he’s letting his small daughter down, he begs culinary help from one of his students who’s mother is a professional chef.

Violence:
None. Kohei gets one or two toddler kicks to the face in temper-tantrums, but nothing even remotely serious.

Language:
Another one we’re safe on. There might be one or two spots where an older character curses to themselves, but sh-t is as harsh as it ever gets.

Nudity:
Another one you don’t have to worry about. Nudity free!

Theology/mythology:
Aside from a magical girl show being a favorite of Kohei’s daughter, nothing much going on here either.

Personal impression:
It’s pretty rare for me to review a show that is safe for anyone to watch, but I’m always happy when I do. And, I won’t lie, I enjoyed this nice, cheerful break from the usual drama in anime.
That said, near the end of this show’s run, we did get a bit more melancholy thrown our way. Even so, this show remained largely bright, which was nice considering the other shows in my line up this season.
As far as characters go, no one stood out as super unique, but nothing was too terribly written either. There were hints of character development, but not as much as I would have liked. The art and music kept up with the theme of the show and the mood and remained consistent. And, blissfully, we avoided any strange romantic entanglements.
Overall, this is a great little feel-good show. It has a few serious moments, but they don’t last too long and thus you almost always end on a good note.
If you want a nice, safe, bright show that makes you want to eat and cook up a storm, this is a great watch.

Error: Twitter did not respond. Please wait a few minutes and refresh this page.